OSFMount also supports the creation of RAM disks, basically a disk mounted into RAM. This generally has a large speed benefit over using a hard disk. As such this is useful with applications requiring high speed disk access, such a database applications, games (such as game cache files) and browsers (cache files). A second benefit is security, as the disk contents are not stored on a physical hard disk (but rather in RAM) and on system shutdown the disk contents are not persistent. At the time of writing, we believe this is the fastest RAM drive software available.

OSFMount supports mounting images of CDs in .ISO format , which can be useful when a particular CD is used often and the speed of access is important.

#1: On certain Windows systems (mostly Windows server 2016), when using OSFMount, Windows will prevent the OSFMount driver from loading. See the following page for more details, "Why do I get the error, Error loading OSFMount Driver?"

#2: If you get an Access Denied message during install for the osfmount.sys file, or OSFmount driver is disabled error. Reboot the machine and reinstall. A previous version of the driver was likely still loaded in memory, preventing an update.

* The supported version of Advanced Forensics Format is AFFv3 with zlib compression support. Encryption and signatures are not supported.

These RAM drive benchmarks were taken on a Intel i7-8700K CPU with 32GB RAM DDR4 PC4-19207 in dual channel mode. RAM disk size was 2GB, formatted with FAT32. Typical speeds with large linear blocks are around 10,000 MBytes/sec. With smaller 4K blocks and random access plus queue depth of 1, speed is still a very respectable 1,500 MByte/sec. Benchmarks were taken with PerformanceTest V9. 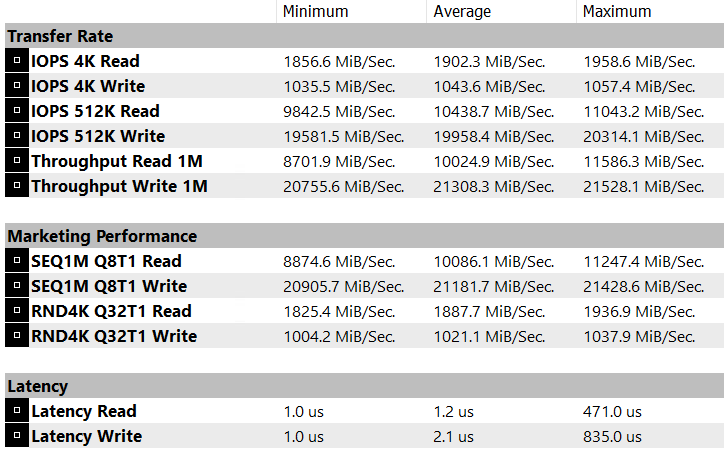